Bangabasi College is a Kolkata-based liberal arts, commerce and sciences college.[1] It offers undergraduate and postgraduate courses of the University of Calcutta. It was founded by Girish Chandra Bose, an educationist, social reformer and agriculturist, in 1887.[2] It was the first nationalist college. It played a major role in Disobedience Movement of 1930 and sacrifice of Shri Jatindra Nath Das, an undergraduate student of the college The college celebrated its 125th anniversary from November 2011 to October 2012. It has been accredited by the National Assessment and Accreditation Council of India (NAAC) with "B+" certificate.[3]

Acharya Girish Chandra Bose founded an institution, named Bangabasi School, in a rented house in Bowbazar Street with six teachers and twelve students in the year 1885. Two years later, the college was established with private management, under the inspiration and guidance of Ishwar Chandra Vidyasagar. It started with F.A. course and slowly obtained affiliation for the B.A., B.L. and M.A. courses to meet the requirements of the college.

In 1930. the college moved into its present premises at 19, Scott Lane (now Raj Kumar Chakraborty Sarani). Honours course in various subjects were introduced.[4] During the World War II another branch of the college was established in Kushtia (now in Bangladesh) in 1942, as the people of Kolkata were troubled by the bombing of Japanese troops. After the World War II it was closed.[5] After Independence in 1947, the college started to see receive huge admissions and thus it created extra-pressure on the existing infrastructure and system. To cope up with the demand, college was divided in morning and evening sections and Acharya Girish Chandra Bose started a new evening section only for commerce. Later in 1964, it emerged as Bangabasi College of Commerce (renamed as Acharya Girish Chandra Bose College in 2005).[5]

Courses listed below are undergraduate, except zoology. Only zoology department has both undergraduate and postgraduate courses.[8][9] 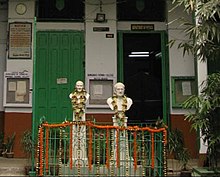 Postgraduate studies started in Zoology in 2005, under the semester system (CBCS), Department of Zoology, University of Calcutta.

Recently, it was acknowledged by the Department of Science and Technology, by sanctioning a grants-in-aid to the extent of Rs 20,00,000 for procuring modern equipment and adequate software support.[7]

Facilities provided in the college:[10]

The alumni of Bangabasi College have achieved prominence in various fields. Following is the list of notable alumni of this college.