The Calcutta High Court is the oldest High Court in India. It is located in B.B.D. Bagh, Kolkata, West Bengal. It has jurisdiction over the state of West Bengal and the Union Territory of the Andaman and Nicobar Islands. The High Court building's design is based on the Cloth Hall, Ypres, in Belgium.[2]

The court has a sanctioned judge strength of 72. 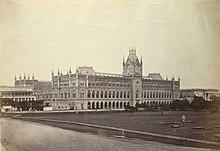 Calcutta High Court in the 1860s 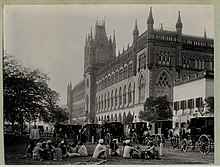 Calcutta High Court in the 1890s

Despite the name of the city having officially changed from Calcutta to Kolkata in 2001, the Court, as an institution retained the old name. The bill to rename it as Kolkata High Court was approved by the Union Cabinet on 5 July 2016 along with the renaming of its two other counterparts in Chennai and Mumbai.[3] The Bill called High Courts (Alternation of Names) Bill was introduced in the Lok Sabha on 19 July 2016[4] and is yet to be passed by both Houses of Parliament. Hence, the High Court still retains the old name.

The current Chief Justice of the court is Justice Thottathil B. Radhakrishnan.[6]

On 20 September 1871, the acting Chief Justice, Sir John Paxton Norman, was murdered on the steps of the courthouse by a Wahabi Muslim named Abdullah.[7][8]

The court has a Sanctioned strength of 72 (Permanent:54, Additional:18) judges.

Judges elevated to the Supreme Court of India-

The neo-Gothic High Court building was constructed in 1872, ten years after the establishment of the court itself. The design, by then government architect Walter Granville, was loosely modelled on the 13th-century Cloth Hall at Ypres, Belgium.[9] In 1977 another building named High Court Centenary Building or annexed building was inaugurated to reduce the pressure.[10]