This article is about the Bengali district. For the Malda type of mango, see List of mango cultivars.
District of West Bengal in India

Malda district, also spelt Maldah or Maldaha (Bengali: [malda], [maldɔɦ], often [maldɔɦo]; is a district in West Bengal, India. It lies 347 km (215 miles) north of Kolkata, the capital of West Bengal. Mango, jute and silk are the most notable products of this district. The special variety of mango, Fazli, produced in this region is popularly known by the name of the district and is exported across the world and is internationally acclaimed. The folk culture of gombhira is a feature of the district, being a unique way of representation of joy and sorrow in daily life of the common people, as well as the unique medium of presentation on national and international matters. According to the National Investigation Agency Malda is believed to be a hub of a fake currency racket.[1][2][3] It is reported that 90 percent of the fake currency that enters India originates in Malda.[4][5]

District headquarters is English Bazar, also known as Malda, which was once the capital of Bengal. The district maintains the traditions of the past in culture and education. Old Malda, the town which lies just east of the confluence of the Mahananda and Kalindi rivers, is part of the English Bazar metropolitan city. The town rose to prominence as the river port of the old capital of Pandua. During the 18th century, it was the seat of prosperous cotton and silk industries. It remains an important distributing centre for rice, jute, and wheat. The area between the historical monument of Jame Masjid (1566) and the landmark of Nimasarai tower across the river Mahananda, constituted a municipality in 1867. Rice, jute, legumes, and oilseed are the chief crops in the surrounding area. Malda is the largest producer of excellent quality of jute in India. Mulberry plantations and mango orchards occupy large areas; mango trade and silk manufacture are the main economic activities.

Pāṇini mentioned a city named Gourpura, which by strong reason may be identified as the city of Gouda, ruins of which are situated in this district. Examples are legion of the relics of a predecessor kingdom being used in the monuments of the successor kingdoms.

It had been within the limits of ancient Gour and Pandua (Pundrabardhana). These two cities had been the capital of Bengal in ancient and medieval ages and are equidistant, north and south, from English Bazar town (once known as Engelzavad established by the British rulers).

The boundary of Gour was changed in different ages since the 5th century BC, and its name can be found in Puranic texts. Pundranagara was the provincial capital of the Maurya Empire. Gour and Pundravardhana formed parts of the Mourya empire as is evinced from the inscriptions, Brahmi script on a seal discovered from the ruins of Mahasthangarh in the Bogra District of Bangladesh. Xuanzang saw many Ashokan stupas at Pundravardhana.

The inscriptions discovered in the district of undivided Dinajpur and other parts of North Bengal, along with the Allahabad pillar inscriptions of Samudragupta, clearly indicate that the whole of North Bengal as far east as Kamrup formed a part of the Gupta Empire.

After the Guptas at the beginning of 7th century AD Sasanka, the king of Karnasubarna, as well as the king of Gauda, ruled independently for more than three decades. From the middle of the 8th century to the end of the 11th century the Pala dynasty ruled Bengal, the kings were devoted to Buddhism. It was during their reign that the Jagadalla Vihara (monastery) in Barindri flourished paralleling with Nalanda, Vikramshila and Devikot.[6]

The Pala empire yielded to the emergence of Sen Dynasty, the Sen rulers were orthodox Hindus, and in the habit of moving from place to place within their kingdom. During this time, Buddhism went on the defensive. It eventually disappeared from the demographic map of Bengal. At the time of Lakshman Sen Goud was known as Lakshmanabati. The Sen kings ruled Bengal till Bakhtiyar Khalji conquered Bengal in 1204 AD. 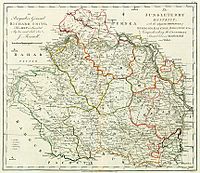 1779 map of the Jungle Terry District.

After the war of Palassy, the British rule started in 1757. The English traders settled in the southern bank of the river Mahananda. Some indigo plant chambers, trade centre, and offices were established. William Carey worked here. But the glory days were gone. 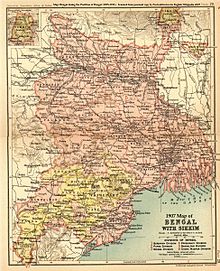 1907 Map of Bengal with Sikkim

This district was formed out of some portions of outlying areas of Purnia, Dinajpur and Rajshahi districts in 1813. At the time of Dr. B. Hamilton (1808–09), the present thanas of Gazole, Malda, Bamongola, and part of Habibpur were included in the district of Dinajpur and the thanas of Harischandrapur, Kharba, Ratua, Manikchak, and Kaliachak were included in the district of Purnia. In 1813, in consequence of the prevalence of serious crimes in the Kaliachak and Sahebganj thanas and also on the rivers, a Joint Magistrate and Deputy Collector were appointed at English Bazar, with jurisdiction over a number of police stations centering that place and taken from the two districts. Thus the district of Malda was born. The year 1832 saw the establishment of a separate treasury and the year 1859 the posting of a full-fledged magistrate and collector.

Up to 1876, this district formed part of Rajshahi Division and between 1876 and 1905, it formed part of Bhagalpur Division. In 1905, it was again transferred to Rajshahi Division and until 1947, Malda remained in this division. During the first Partition of Bengal of 1905, this district was attached to the newly created province of Eastern Bengal and Assam. Malda has a history of the Indigo movement led by Rafique Mondal. The Santhals got insurgent and captured historic Adina Mosque in support of Jeetu. Again in August 1947, this district was affected by partition. Between 12–15 August 1947, the fate of the district as to which side it should go, to Pakistan or to India, was undecided because the announcement of the partition award of Sir Radcliffe did not make this point clear. During these few days, the district was under a Magistrate of East Pakistan. When the details of the Radcliffe Award were published, the district came over to West Bengal on 17 August 1947. However, the sub-division of Nawabganj was severed from Malda and was given to East Pakistan as a sub-division of the Rajshahi district.[6]

Malda is called the gateway of North Bengal. It was once the capital of Gour-Banga with its 3,733 square kilometres (1,441 sq mi) lay of the land classified into Tal, Diara, and Barind.

To the south is Murshidabad district, to the north are North Dinajpur district and South Dinajpur district. To the east is the international border with Bangladesh. To the west is Santhal Parganas of Jharkhand and Purnea of Bihar.

Malda, the district headquarters which lends its name to the district, during its early days grew up only near the side of the river Mahananda, and now the place is known as Phulbari. Some of the oldest houses can be found here. The city started to grow from 1925–1930. Now nearly a half-million people live in this city, and it is one of the biggest cities of West Bengal. It is a part of the former Gour. The city is recognized as the English Bazaar municipality. Its notable railway station is named as Malda Town.

Mahadipur international border crossing on Malda-Rajshahi route is at Mahadipur town in Malda district of West Bengal in India.

The first monthly periodicals published from Malda was Kusum, edited by Radhesh Chandra Seth, a noted personality of the then Malda. Though the exact date of its first publications is not known, it has been assumed by the informed sources that Kusum was first published in the 1890s. In 1896, Radhesh Chandra published two weekly newspapers Gourdoot and Gourbarta.[9] In 1897 Maldaha Samachar edited by Kaliprasanna Chakrabarty began to be published. Maulavi Abdul Ganikhan published 'Malda Akhbar' in 1914. In the same year, another periodical Gambhira' edited by Krishna Charan Sarkar was published. Damru, Adina and Minar—three weekly newspapers were published in 1941. The editors were Nanda Gopal Chowdhury, Akbar Munshi and Abdur Rahaman respectively.

The most important among them was Gourdoot which was first published on 1896 by Radhesh Chandra Seth. But within a short period, the publication of the newspaper came to an end as the editor faced a serious financial loss. The 'Gourdoot' again began to be published from 1912 under the editorship of Lalbihari Majumdar. Majumdar was a great scholar and his literary sense was appreciated by Benoy Kumar Sarkar and Radhesh Chandra Seth. In this endeavor, the editor was greatly supported by them and financed by Sarat Chandra Roy Chowdhury, Maharaja of Chancal. The Gourdoot was used to be published on Thursday of each week. The paper contained 6 pages and the price is one anna in 1944. The political outlook of the newspaper is pro-congress. Moreover, Lalbihari Majumdar, its editor took a pioneering role in organizing the congress movement in Malda. He has for a long time been the vice-president of the district Congress. The periodical had an implied antipathy towards Gandhian ideology.

The most important among the popular movement is the one led by Jitu Santhal in 1932. Historians like Tanika Sarkar observes Jitu's movement was rooted in the rich tradition of tribal struggle in Malda. The early form of Santhal resistance was migration, which Professor Ashim Sarkar thinks amounted to a kind of passive resistance. Active struggle between the Santhals and their landlords began about 1910.

As the barind (barindra) area began to be transformed into a developed agricultural zone, the zamindars of barind began to enhance the rent and curb the rights so far enjoyed by the Santhal from 1910 onwards. M.O Carter mentions cases were commonly found in which the lands cultivated by the adhiars, which were previously their occupancy holdings but had been sold up in rent or mortgage sales. This caused friction among zamindars and Santhals. The friction took an alarming proportion as early as 1910 when a zamindar of Bulbulchandi tried to enhance the rent. The Santhal tenants rose into protest. The gravity of the situation compelled Mr. Vas, the District Magistrate, to interfere and fix the rent. It was in this backdrop of oppression, exploitation and injustice. Jitu Santhal of Kochakandahar village of Habibpur began to mobilise the Santhals for a widespread movement. In 1926 Jitu became the leader of the Santhals by converting them into Hinduism. In the same year 'Jitu's Sanyasi Dal' defied police order to perform a Kali puja to assert its new Hindu status. In September 1928 Santhals under Jitu's leadership looted the autumn crop of Sikharpur which had recently been taken away from them in barind region. The District Magistrate and the Superintendent of the Police rushed to the spot with armed police. After much skirmishes, Jitu along with his sixty followers arrested at the hand of the police.[10]

In 2006 the Ministry of Panchayati Raj named Malda one of the country's 283 most backward districts (out of a total of 640).[11] It is one of the eleven districts in West Bengal currently receiving funds from the Backward Regions Grant Fund Programme (BRGF). No notable industry is made here. Most of the people of the district are agricultural labourer and unskilled labourer. [11][12]

Other than municipality areas, each subdivision contains community development blocs, which in turn, are divided into rural areas and census towns.[16] In total there are 10 urban units, 2 municipalities and 3 census towns. English Bazar and Old Malda form an urban agglomeration.

Southern Malda is dominated by 59% Muslim population. Sujapur Idgah is one of the largest in India. Hindus are 40% in this part.

Overall Malda district (North Malda & South Malda together) Muslims are 51%, Hindus are 48%, Others are 1%.

This district is predominantly Bengali linguistically.

Almost all of the major religious festivals are celebrated, like

Some of the most reputed cultural fairs of the district are 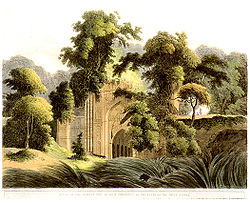 Though Malda is one of the least educated districts of West Bengal, it contains some of the élite schools of the state.[citation needed]
Notable schools of the district include:-