Ordnance Factory Board (OFB) consisting of the Indian Ordnance Factories is an Government agency under the control of department of defence production (DDP) Ministry of Defence (MoD), Government of India. It is engaged in research, development, production, testing, marketing and logistics of a product range in the areas of air, land and sea systems. OFB comprises forty-one ordnance factories, nine training institutes, three regional marketing centres and four regional controllerates of safety, which are spread all across the country.[8][9] Every year, 18 March is celebrated as the Ordnance Factory Day in India.[10][11]

Ordnance Factory Board predates all the other organisations like the Indian Army and the Indian Railways by over a century. The first Indian ordnance factory can trace its origins back to the year 1712 when the Dutch Ostend Company established a Gun Powder Factory in Ichhapur. In 1787, another gunpowder factory was established at Ichapore; it began production in 1791, and the site was later used as a rifle factory, beginning in 1904. In 1801, Gun Carriage Agency (now known as Gun & Shell Factory, Cossipore) was established at Cossipore, Calcutta, and production began on 18 March 1802. This is the oldest ordnance factory in India still in existence.[20]

The Indian Ordnance Factories have not only supported India through the wars, but played an important role in building India with the advancement of technology and have ushered the Industrial Revolution in India starting with the first modern steel plant of India much before Tata Steel,[21] first modern electric textile mill of India, first chemical industries such as smokeless propellant plants of India,[22] established the first engineering colleges of India as its training schools,[23] played key role in the founding of research and industrial organisations like ISRO, DRDO, BDL, BEL, BEML and SAIL.[21]

In May 2020, Prime Minister Narendra Modi's government announced that it will corporatize Ordnance Factory Board units. As part of Prime Minister's Self Reliant India Atma Nirbhar Bharat scheme, finance minister Nirmala Sitharaman on 16 May 2020 announced the decision to corporatize the OFB units.[24] The move has not gone down well with the 80,000 plus work force of OFB units who have threatened an indefinite strike against the move.[25] The Ministry of Defence formed a high level official committee, comprising officials from the department of defence production and Indian Army, to address the concerns of defence employees unions and OFB officers' association.[26] 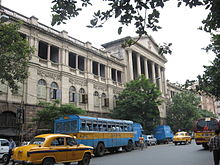 The Apex Board is headed by the director general of ordnance factories, who acts as the chairman of the board (ex officio secretary to Government of India) and consists of nine other members, who each hold the rank of Additional DGOF. Ordnance factories are divided into five operating divisions, depending upon the type of the main products/technologies employed. These are:

Each of the above group of factories is headed by a member/Additional DGOF who is in the rank of Special Secretary to Government of India. The four remaining members are responsible for staff functions, viz personnel, finance, planning and material management, and technical services, and they operate from Kolkata.

Each ordnance factory is headed by a general manager who is in the rank of Additional Secretary to the Government of India.

There are Ordnance Factories Institute of Learning (OFIL) in Ambajhari, Nagpur; Ambernath, Mumbai; Avadi, Chennai; Dehradun; Ishapore, Kolkata; Khamaria, Jabalpur; Kanpur and Medak. Each OFIL is headed by a principal director, and NADP by a senior principal director. NADP provides training to Group A officers, whilst the other eight institutes impart training to Group B and Group C employees of the ordnance factories.

OFB has Regional marketing centres and Regional controllerates of safety as well.

The Indian Ordnance Factories Service (IOFS) (Hindi: भारतीय आयुध निर्माणी सेवा) is a civil service of the Government of India. IOFS officers are Gazetted (Group A) defence-civilian officers under the Ministry of Defence.

IOFS is a multi-disciplinary composite cadre consisting of technical – engineers (civil, electrical, mechanical, electronics), technologists (aerospace, automotive, marine, industrial/product design, computer, nuclear, optical, chemical, metallurgical, textile, leather) and non-technical/administrative (science, law, commerce, management and arts graduates). Technical posts comprise about 87% of the total cadre. The doctors (surgeons and physicians) serving in OFB belong to a separate service known as the Indian Ordnance Factories Health Service (IOFHS). IOFHS officers are responsible for the maintenance of health of the employees, and the hospitals of OFB. They report directly to the IOFS officers. IOFS and IOFHS are the only two civil services under the Department of Defence Production.[30]

Civilians are required to hold an Arms License (issued only for non-prohibited bore category weapons) in order to buy firearms in India. The following products of the Indian Ordnance Factories Board are available for civilians:

Arms and ammunition, weapon spares, chemicals and explosives, parachutes, leather and clothing items are exported to more than 30 countries worldwide.